Tell me nothing but the truth – Part 4

From part 3 we continue here.

So, is Christ God?

Having declared with a simple “Thus saith the Lord” that the One God is the Father, a question is raised. Is Christ also God? Let us see what the Bible says.

Thomas declares in very simple way calling Christ “My God”. So, we see that Christ is called God.

Isaiah the prophet also declared that Christ would be called “the mighty God”. So, we see again that Christ is called God in the words of prophecy (Isaiah) and of witness (Thomas).

We can say “thus saith the Lord, Christ is called God”.

That’s confusing isn’t it? We saw that the One God is the Father only. So how is it that Christ is also God? Do we now have two Gods? This is where many people choose to throw away all the “Thus saith the Lord” we have seen so far and start forming a new One God out of many persons, which as we saw is an assumption and a lie.

But let us read further. Why is Christ also called God, when the One God is already there, the Father only? We turn to Hebrews and find this.

Hebrews 1:1 God, who at sundry times and in divers manners spake in time past unto the fathers by the prophets, 2 Hath in these last days spoken unto us by his Son, whom he [God] hath appointed heir of all things, by whom also he [God] made the worlds; 3 Who being the brightness of his [God’s] glory, and the express image of his [God’s] person, and upholding all things by the word of his power, when he had by himself purged our sins, sat down on the right hand of the Majesty on high; 4 Being made so much better than the angels, as he hath by inheritance obtained a more excellent name than they. 5 For unto which of the angels said he [God] at any time, Thou art my [God’s] Son, this day have I [God] begotten thee? And again, I [God] will be to him a Father, and he shall be to me a Son? 6 And again, when he [God] bringeth in the firstbegotten into the world, he [God] saith, And let all the angels of God worship him. 7 And of the angels he [God] saith, Who maketh his angels spirits, and his ministers a flame of fire. 8 But unto the Son he [God] saith, Thy throne, O God, is for ever and ever: a sceptre of righteousness is the sceptre of thy kingdom. 9 Thou hast loved righteousness, and hated iniquity; therefore God, even thy God, hath anointed thee with the oil of gladness above thy fellows. (emphasis added)

Let us see what is going on here. Here we see God and the Bible is explaining how God, the One God has communicated with us, people. First, he communicated through prophets. Later and now, he communicates through his Son. So we see again that the God is there, then his prophets then His Son. But notice what is said to qualify the Son’s role in this communication.

The Son is not like angels. He is much more than angels. That’s because:

Now notice what the Bible goes on to say. We have seen that Christ was given everything by God. The other thing he was given besides the power of God is the very name of God. He inherited it. He has the right to inherit because he is a real Son of God. Thus, he is better than angels.

The Bible now shows us how Christ inherited all things including the name of God from God. This inheritance is shown by the words of God to His Son. God speaks better things to his Son than to angels. God speaks five times in this passage. Remember that in all this speech, God is declaring the inheritance, in other words explaining what the inheritance is. Let us see what God says about His Son’s inheritance.

First God declares his fatherhood over His Son. He declares that he, God is Christ’s Father because he has begotten Christ. Angels where never told that they were begotten by God.

Then God declares again that he has a Father-Son relationship with Him. In a Father-Son relationship, where there is only one Son, all that belongs to the Father, he gives to the Son, everything. Many Fathers even give their only Son the same name as themselves (Luke 1:59 And it came to pass, that on the eighth day they came to circumcise the child; and they called him Zacharias, after the name of his father.).

God makes it clear that the angels are not in the same class as Christ, God’s Son. God instructed angels to worship Christ as they worship God. So, it is no surprising to us that Christ is to be worshipped. The worship due to him is channelled to the Father, to whom all worship ultimately goes. The worship given to the Son is to the glory of the Father.

God continues by placing the angels in their right place below Christ, God’s Son. The angels are his ministers. Now, God turns to his Son and finishes off the inheritance ‘speech’ with a strong statement. Listen to this explanation of the inheritance.

God declares His Son to be God. Christ having received everything from God, including the right to be worshipped, the same nature (express image of God’s person) as God, the same Spirit as God and a kingdom, God appoints His Son as God thereby completing the inheritance. True, because the Son is and has everything that God is and has, but by inheritance. While God did not inherit from anyone, the Son did inherit everything from His Father.

This Christ, whom God has bestowed with so much, whom God has loved so much, is the one given to us for our salvation. So, the inspired writer says again.

“In giving us His Son, the Father gave the most costly gift that heaven could bestow.” { YRP 200.2}

So now we see the truth. Yes, Christ is called God. But that is not said in order to form a One God by putting the Father and the Son together. NO. He is called God because he inherited being God as the only-begotten Son of the One God. As the son of any earthly king is fully a man and a king like his father, so is Christ, but more. Christ is the express image of His Father, that means he looks like, thinks like, talks like, behaves like His Father. So, the Bible can say:

Christ came to reveal the Father.

Him and His Father are one. Why? Because the Son never does anything, say anything he has not seen from the Father. The behaviour of the Son is exactly as the Father. And they share the same name, the same nature and the same Spirit. They are truly united, truly one but not to form the One God.

Now the truth is out. We do not make two Gods by calling Christ God. No not at all. We simply acknowledge that God made an express image of himself in Christ and gave Christ everything by inheritance. The One God remains the One God, the Father, and the Son remains the Son, God by inheritance, Fully God in the Highest Sense because God gave Him everything. So, the Bible says:

God gave everything to Christ. He is the divine Son of God, fully God by inheritance. By His only begotten sonship to God, Christ is called God.

I trust that so far we have not made a single assumption. We have simply taken a “thus saith the Lord” and no further. We have raised another question. Is Christ the Son of God since he was born as a man on earth or before? Let us see some more plain statements.

We know that in terms of earthly number of years, John was older than Christ by about 6 months. But in terms of existence, John says Christ “was before him”. So Christ existed before John existed.

The inspired writer then says this:

“Angels were expelled from heaven because they would not work in harmony with God…THIS FACT THE [FALLEN] ANGELS WOULD OBSCURE, THAT CHRIST WAS THE ONLY BEGOTTEN SON OF GOD, and they came to consider that they were not to consult Christ.” {TDG 128.2}. (emphasis added)

So, the truth is out again. Christ was the Son of God, the only-begotten Son of God before he was born on earth. Not just that, if you believer the inspired writer, the devil and his angels did not like that fact and are still busy trying to make that fact unclear. 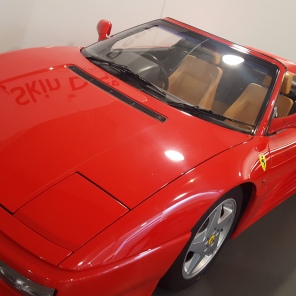